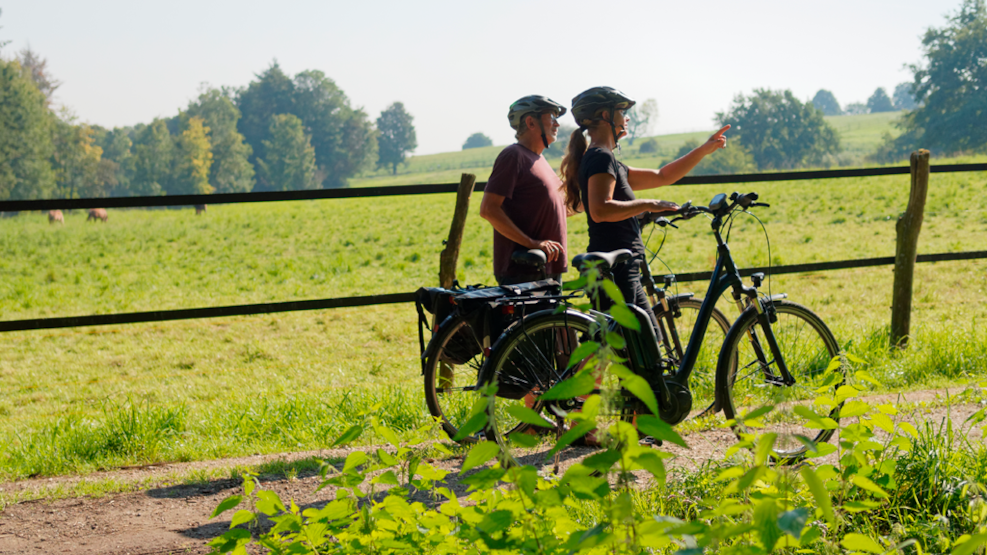 A sense of history and world heritage topped off with spectacular vantage points take the pride of place on the Christiansfeld cycle route. The local history has offered many landmark events and has left its visible marks in the form of vital regional nodal points for both industry and trade.

Under "Links" at the bottom of the page you will find a link to the route in Naviki. Here you can register as a user, after which you can enter the route and save it under "my routes". Then you can download the Naviki app and open up and find the route under "my routes" to follow the route.

1) Christiansfeld – Prætorius Torv
Visit UNESCO World Heritage Christiansfeld; an exceptional example of a Moravian Church planned colony settlement. Founded in 1773, Christiansfeld was named for King Christian VII, who gave permission for the settlement. The city was given special privileges by the King, amongst others, ten years’ exemption from customs and tax as well as permission to carry on trade and crafts on very lucrative terms. A particular feature of the city is that it is constructed around the central church surrounded by the most important buildings of the city – the communal buildings (homes for the unmarried brethren, sisters and widows), the rectory and the principal’s home.

2) Torning Mølle
Cycle past the mill Torning Mølle, which is beautifully located at the stream Taps Å. The mill was constructed at the end of the 1800s and is an industrial plant typical of its time. It is built in yellow brick with decorative, red elements. Torning Mølle was established as a water mill plant and continues to be used.

3) Noret, Birdwatching Tower
Climb the two-storey birdwatching tower and enjoy the beautiful view of Hejls Nor. In the game preserve, you may experience the bird life by the lake, where you may spot swans, geese, merganser, grebes and ducks to name but a few. If you are lucky, you may also spot the western marsh harrier or maybe glimpse the largest bird of prey in Denmark, the white-tailed eagle.

4) Hejlsminde Strand
Enjoy a swim at the beach of Hejlsminde Strand take a walk in the marina, which is the only coastal harbour in the Kolding Municipality and enjoy the view of the handsome boardwalk. The area offers various activities and is a favourite spot for surfers, amongst others. The city is located on the border of Southern Jutland and North Schleswig and is known as one of the pearls of the Little Belt.

5) Sydbanen
Experience a small part of the history of WWII at the local, southern railway line Sydbanen. The Sydbanen was opened on 29 November 1911. It comprised three lines: Kolding-Hejlsminde, Kolding-Taps and Vamdrup-Taps. The first year, the number of passengers was approximately 250,000. However, on 29 Marchs 1940, it was decided to close down the line. A couple of weeks later, however, Denmark was occupied by Germany and, during WWII, the railway line was used more and more for the transport of goods and passengers. The railway line was finally closed down on 15 December 1948.

7) Kær Mølle
Swing past the mill Kær Mølle and see the well-preserved farmhouse and stables which bear witness to the fact that this was once one of the largest enterprises of the parish of Hejl. Until 1588, the mill was part of the property of Vargaarde Manor and the Holstein noble family Breide, then it passed to King Frederik II and the Crown and became a copyhold mill. The fact that it became a copyhold mill meant that the copyholders belonging to the mill were obliged to have their grain ground at the mill. It was illegal to have your grain ground anywhere other than at the King’s mill. In addition, the copyholders were also obliged to participate in the repair and maintenance of the mill. An obligation which was not repealed until 1852.

8) Fjællebroen
You cross a small bridge, Fjællebroen, which crosses the valley between Aller and Vejstruprød. In 1830, the Fjællebroen was constructed and became a main thoroughfare, as it formed the border between Denmark and Germany from 1864 until the reunion of North Schleswig with Denmark in 1920. When the main road between Kolding and Haderslev was rerouted, the bridge lost its purpose and was left to slowly fall into disrepair. However, in 1980 - 150 years after it was constructed – it was restored and today the bridge is listed and falls under the Danish Agency for Culture and Palaces.